Ed Sheeran caused quite a stir back in 2018 when he showed up to an event wearing a ring. He had announced his engagement previously, but now seeing him with a ring, everyone assumed one thing: they got married! This was not true, as it turns out, and Ed explained that he was wearing an engagement ring.

Since then, there has been quite the discussion around whether or not men wear engagement rings. While it is by no means a popular choice, things are certainly starting to change and a growing number of men are wearing engagement rings.

Society is changing; people are waiting longer to get married, same sex marriage is legalized in many countries, and traditions in general are taking the back seat to couples doing what they want to do instead of what tradition tells them to do. This has impacted the engagement ring tradition as well.

The History of Engagement Rings

There are reports dating back hundreds of years, even as far back as the 1400s, of men presenting women with engagement rings.

However, the modern engagement ring tradition that we all know of now has roots a bit more recently, dating back to the late 1800s and early 1900s. At this point, various companies created advertising campaigns that popularized giving diamond engagement rings to women.

Since then, the tradition has stayed pretty much the same through the years. A man would give a woman some type of diamond ring to propose marriage. She would wear this ring as her engagement ring until her wedding, where she would then wear an additional wedding band. The husband at that point would then also wear the wedding band to signify he was married.

For many years, the engagement ring was seen as important for a man to give to a woman so that other potential suitors would see that she was ‘off the market ‘.

While many today would argue that men should be held to an equal standard, wearing a ring for them to also signal that they are not available, for years the tradition held that women would wear the engagement rings.

In fact, for many years an engagement ring was seen as a signal that a woman was ‘owned’ by a man. Clearly today that is no longer the case, and engagement rings are a sign of a person’s love and commitment to another person.

While many things have changed when it comes to traditions and marriage, what has still remained popular is women wearing engagement rings, and not men.

As we mentioned earlier, things are starting to change, and you will find more and more men are choosing to wear engagement rings.

Tradition has lost a lot of its importance, and couples today are making decisions based on what they want instead of what they are told to do.

Not a large percentage, but one that is likely to increase.

For example, an increasing number of women are making the decision to propose to their boyfriends. In this case, the man is presented with an engagement ring instead of the woman.

When you think about it, this only seems weird because of tradition. Why does the man have to be the one to propose marriage? An increasing number of women are saying, they don’t!

There is also a rising trend of both people wearing an engagement ring, similar to what Ed Sheeran did with his fiance. Instead of the old, patriarchal tradition of only a woman having to signal she is off the market, more and more couples are opting to both wear couple rings to equally show their commitment.

What it comes down to is that today, more than ever, you are free to do what you want when it comes to getting married. If you and your partner like the traditional method of engagement, that is perfectly fine.

However, if you want to do things a bit differently, it is much more of an option today. People are becoming much more accepting of new traditions, including the concept of a man’s ring!

Here are some awesome rings you can shop right now that make for great engagement rings. Whether you are looking for one for yourself or are looking to propose, these rings should give you an idea of what options are available! 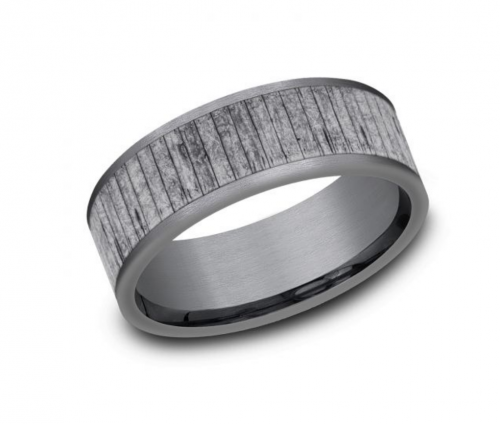 It is not at all flashy or shiny, and in fact it is designed to look like wood. Perfect for the outdoorsman, this is a great ring that will show his love for nature, and his love for his partner. 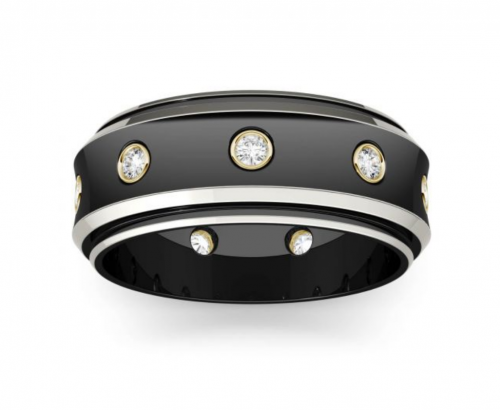 The round moissanite stones give it just enough sparkle. There is no mistaking that this is an engagement ring, and if that is what you are looking for, this is a perfect option. 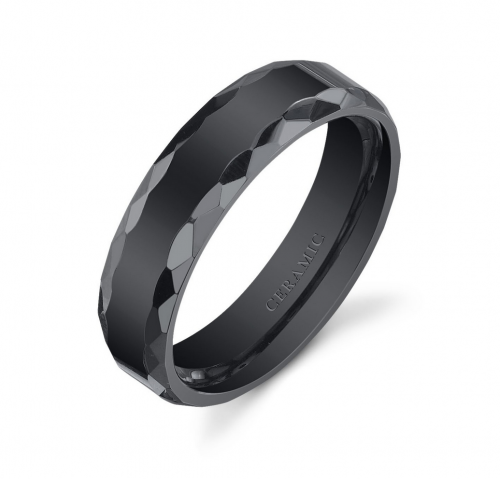 There is also the option to go with more of a wedding band style ring to give as an engagement ring. This ceramic ring is edgy and cool, and in fact it is designed to be a unisex ring. If you are really looking to keep things equal, we think it is a cool idea to get matching rings!

The faceted edge give it a really unique appearance and we think it is perfect for an engagement ring for anyone who wants something different without being too flashy. 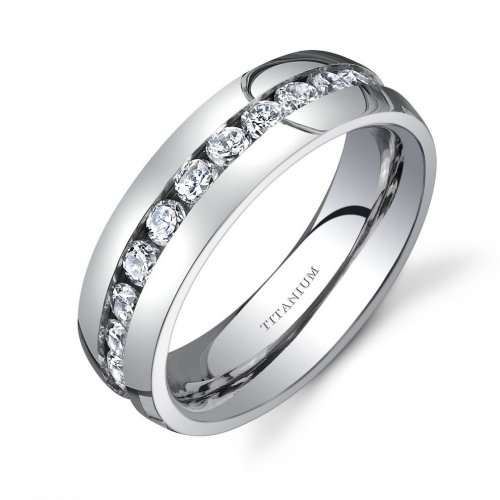 This ring is perfect for any man who wants more of a traditional appearance. The titanium and the CZ stones ensures this ring looks like an engagement ring (while also being affordable since it is not real diamonds but includes a great diamond alternative – cubic zirconias!).

We love that the stones are set in the middle of the band with titanium on either side; it is a completely fresh take on the traditional engagement ring. This is another great unisex option that would be perfect to give to both a man and a woman. 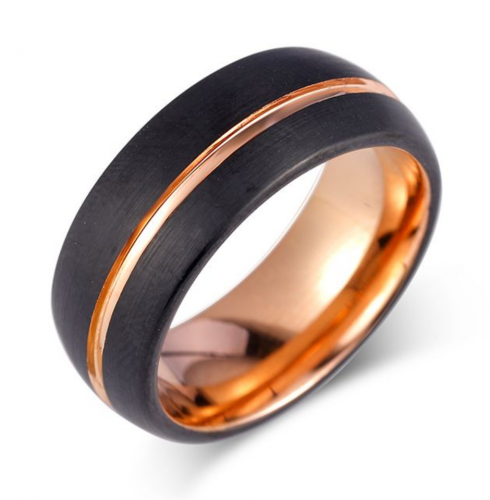 The rose gold trend doesn’t just have to be for women! We love the contrast between the black and the rose gold titanium steel in this band. It has a traditionally masculine appearance to it, with the rose gold adding a unique accent that isn’t too much.

This is a great way to have some shine in your ring without too much; perfect for the man who is afraid of too much shine but does want something. This is a great compromise! 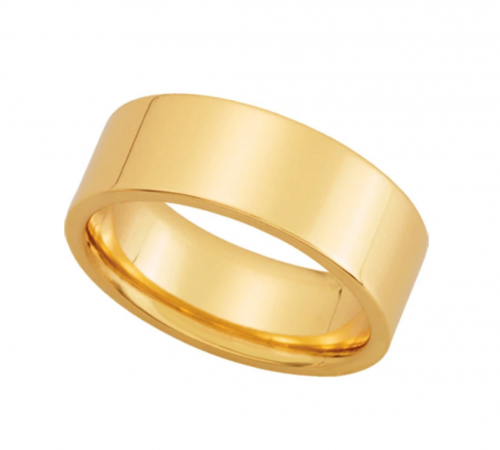 It doesn’t get more traditional for a man’s band than a yellow gold ring. However, if you happen to like the traditional look and want to opt for that for an engagement ring, go for it! The flat design makes it unique while still being very traditional.

In addition to looking unique, this design gives the ring a comfort fit, perfect for any man who is not used to wearing a ring and wants something completely natural and comfortable feeling. 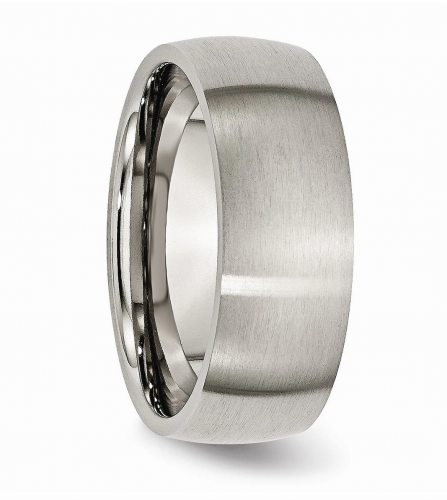 Finally, this ring also puts a few modern touches on an otherwise very traditional looking band. The domed design is unique, as is the brushed texture of the titanium.

This is a great, universal ring that is a great option for an engagement ring for just about any man. It is stylish and unique, while still being traditional. It is also a great fit for any man who has a simple, minimalist taste.

While plenty of couples still follow age old traditions (and there is nothing wrong with that!), plenty of other couples are choosing to do things their own way.

As a result, a growing number of men are in fact wearing engagement rings to symbolize their love and commitment to their partner as they prepare for marriage.

What do you think of male engagement rings? Is it just a trend for now, or a sign of a permanent change? Would you wear one, or ask your male partner to wear one? Let us know! 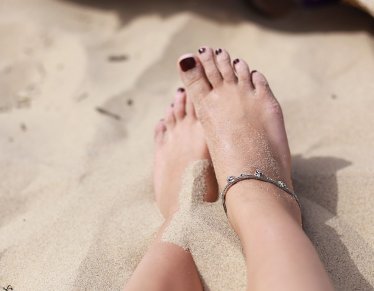